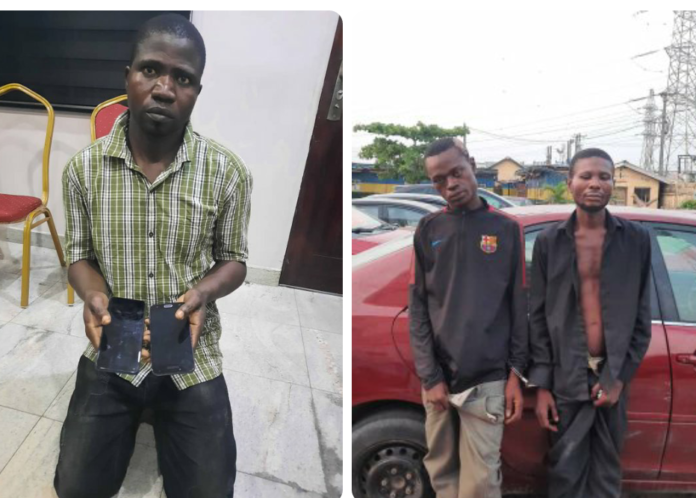 The police detectives attached to Maroko Division of the Lagos State Police Command on Thursday 1st April, 2021 arrested one Nurah Muazu, m, 31, at Aboki Estate, Marwa Lekki, who is alleged to be the receiver of the One-Chance robbery suspects arrested by the officials of the Lagos State Traffic Management Authority on Thursday at Lekki Area of the State while on duty.

In furtherance of the directive of the Commissioner of Police, Lagos State, CP Hakeem Odumosu to painstakingly investigate and apprehend other members of the One-Chance robbery syndicate and other similar syndicates, who have been placed under surveillance for a while by the police, the Divisional Police Officer, Maroko Division led a team of detectives to Aboki Estate, Lekki where the receiver was arrested and two mobile phones, that were snatched by the same suspects, on Wednesday 31st March, 2021, in Lekki were recovered from him.

The suspect and his gang members, Roland Onoge, m, 38, and Daniel Abah, m, 28, who were intercepted by officials of LASTMA on Thursday 1st April, 2021, along Marwa Bus Stop Lekki, having robbed one Isaac Amarachi, f, in their unregistered red Toyota Camry operational car, are assisting the police on getting more information about the syndicate and many others operating around Lekki and Ajah Areas of the state.

While commending the efforts of the LASTMA official that intercepted the suspects and the police detectives for the follow-up, the Commissioner of Police admonished other security and safety agencies to emulate their acts of professiinalism and commitment to duty as every individual is expected to play a vital role in securing Lagos State and all hands must be on deck to achieve safer Lagos.

The police chief therefore ordered that the suspects be transferred to the State Criminal Investigation Department, Panti, Yaba for discreet Investigation.

In the same vein, the Commissioner of Police, Lagos State, CP Hakeem Odumosu, has put officers and men of the command on their toes to intensify patrol and other anti crime strategies in their respective areas of responsibility in order to protect lives and property of Lagosians during the Easter Celebration in the state.

CP Hakeem Odumosu has also charged them to implement the operation order prepared for the celebration by ensuring adequate deployment of men at strategic places especially at worship centers, parks for picnics and recreational arenas as many funseekers will be out to celebrate the Easter.

He however appealed to Lagosians, especially, funseekers to be moderate in their celebration activities and respect the laws of the land with no exception to the COVID-19 protocols. The Commissioner of Police also warned Lagosians to desist from reckless driving and gross violation of traffic rules and regulations particularly driving against the traffic (one way) and plying the BRT corridors.

He emphasised that the police and other security operatives have been deployed across the state to enforce law and order.

JUST IN ! Buhari’s ADC Off to Santiago for Promotional...