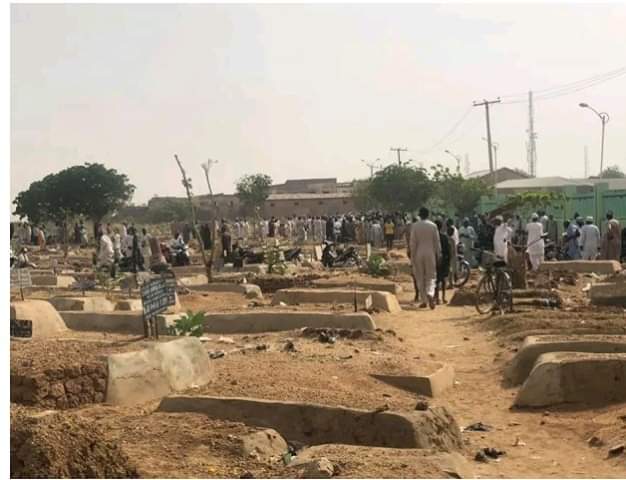 Kano State again lost two prominent citizens on Sunday, to “a strange disease” that has left residents in fear.
The latest victims are a former Commissioner for Education, Alhaji Aminu Yahaya and Bayero University, Kano (BUK) journalism teacher, Prof. Balarabe Maikaba.
On Saturday, more than 10 prominent indigenes of the state, including Musa Tijjani, editor of Triumph, the state-owned newspaper, died.
Other prominent citizens who died on Saturday are Prof. Ibrahim Ayagi, Dr. Musa Gwarzo, Dahiru Rabiu, Adamu Dal , Salisu Lado, Shamsiyya Mustapha, Nene Umma, Garba Fagge, Nasiru Bichi, Aliyu Dikko and Aaminu Yahaya.
Last week, the state buried 150 people who died as a result of the strange disease.
Governor Abdullahi Ganduje described the situation as “getting tougher and tougher.”
Our correspondent gathered that Yahaya and Maikaba who were both diabetic died within 10-hour interval after developing slight fever on Saturday night and Sunday morning.
Muhammad Yahaya, brother to the former commissioner, said “he died last (Saturday) night and we have just buried him.”
Maikaba, a prominent scholar and former Head of the Department of Mass Communication, BUK, was said to have passed on at a private clinic in Kano metropolis.
A relative of the deceased, said: “When he complained of fever, we rushed him to the hospital where he died
“We are already moving to the Abattoir Cemetery where he will be buried,” he told the News Agency of Nigeria.
Maikaba played a prominent role in the unbundling of BUK’s Department of Mass Communication into various departments and its subsequent upgrade to the status of a Faculty.
He served in various capacities, including Head of Department, Dean of the Faculty and other key academic positions in the university.
The state government which yesterday said it was investing the deaths, explained that preliminary report by the Ministry of Health showed that they were not COVID-19 related.
In spite of the clarification by the government, many residents of Dala, Nassarawa, Fagge, Gwale, Kumbotso, Ungogo, Kano Municipal and Taurani Local government areas which make up the Kano Emirate Council are still in a state of apprehension and anxiety.
They called on the government to expedite action on the investigation into the remote and immediate causes of the deaths.
Undertakers, who admitted there have been an upsurge of dead bodies into the cemetery for burial, are wondering what must have been the cause of the deaths.
One of them, Aminu Abubakar, who spoke to our reporter, at the Kara Cemetery, described as strange; the way and manner people are dying in Kano lately.
He said: “It is not only in this cemetery that we are experiencing this situation. My colleagues from other cemeteries tell me they have the same experience.
“I am not a medical doctor, so, I cannot explain exactly the circumstances behind these deaths. It could be due to the intensive heat; and as I can observe, most of the dead bodies that we have buried were mostly elderly people.”
A worried Governor Ganduje admitted that the health situation in Kano is “getting tougher and tougher by the day”.
He said: “Everything is becoming so serious now. But as the situation gets serious, we are surely on top of it. We require testing machines in Kano and want the Federal Government to bring them.
“It is when we have the machines that we will be able to tackle whatever threat that is facing us.”
He therefore appealed “to the Federal Government to support Kano the way it supported Lagos and Ogun states”
In a statement on Sunday the government assured residents that it was on top of the situation.
The statement added that Ganduje had directed the Ministry of Health to probe the immediate and remote causes of the deaths.
The Commissioner for Information, Mallam Muhammad Garba, who signed the statement, said although investigation into the cause of the deaths was ongoing, preliminary report from the Health ministry indicated that the deaths were not caused by COVID-19 .
According to him, most of the deaths were caused by complications arising from hypertension, diabetes, meningitis and acute malaria.
He added: “Though we agree that the situation on hand currently is serious, we are not resting on our oars in taking appropriate measures to ensure that the good people of Kano State, and indeed, residents in the state protect themselves from COVID-19 pandemic.
“The government has three modern isolation centres where those that tested positive to COVID-19 are being cared for. We are also hopeful of getting additional two isolation centres soonest. The government has also hired a hotel where suspected cases are accommodated.
“The government is concerned over what is happening. The ministry of Health is already handling the situation. When they are through with the medical investigation, further necessary actions will be taken.
“I urge the good people of Kano state not to panic. Government is on top of the situation. The mystery or whatever it is will soon be unraveled.”

TRUMP ‘STANDS BY HIS ACTIONS’ OVER TELLING PEOPLE TO INJECT DISINFECTANTS...

MAN COMMITS SUICIDE AFTER WIFE TOLD HIM THEIR ONLY CHILD WAS...

BELLO AND HIS HOOTERS

GATES FOUNDATION DONATES ANOTHER $150M TO FIGHT AGAINST COVID-19 PANDEMIC