YOUR PASTORS DON’T WANT 5G, BUT THEY ARE USING 4G TO RECEIVE TITHES AND OFFERINGS -Rev. Fr. Oluoma 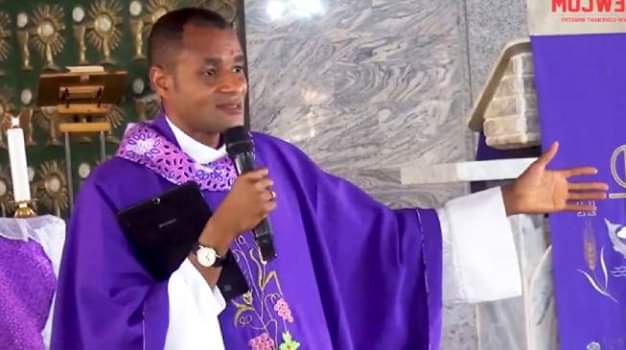 Rev. Fr. Oluoma Chinenye John, a priest of the Catholic Archdiocese of Abuja, has debunked the news that Coronavirus is a punishment for Sins, adding that all the conspiracy theories which says that 5G is linked to Coronavirus and Anti-christ is Fake.

“Your pastor has been using 4G technology to receive tithe, breakthrough seed, long life seed, life partner seed and all other seeds my phone can’t type for want of space. He uses same 4G technology to live stream his messages to you and hundreds of thousands of others which ordinarily he couldn’t. Now 5G is out and suddenly it’s the mark of the beast and the new world order.

“You migrated from driving car to flying private jet (a technological leap far higher than moving from 4G to 5G) and it’s not a NEW WORLD ORDER abi?

Vaccines were used to stop hitherto killer diseases like small pox, measles and no chip was planted in your bodies? If the so called Antichrist wanted to put his mark on you by vaccines, why would he be so stupid to use coronavirus that will provoke global attention and response as we see, why wouldn’t he have used malaria which almost everyone gets treated with injection.

“I know that stupidity is not one of the vices of the devil, he doesn’t make a big show of his tactics. My problem is that after a while now this ‘conspiracy believers’ will quietly and hypocritically start using 5G with the rest of us when the whole virus scare is gone and the technology becomes accessible.

“Didn’t this ‘end time’ prophets tell us that the world would end in 2000, that computers will crash bc of the new millennium? Did they stop using computers since then, haven’t they even migrated to higher versions of computers? We have to find a way of making people take responsibility for their deliberate and obstinate scaremongering.

“That a minister of the gospel in this era still believes and teaches that 666 and one Antichrist figure(monster) will arise some day makes me feel like some ignorance are irredeemable. Okay na, before it was witches and wizards, spiritual wives, spiritual husbands, spiritual children, poverty demons and ancestral curses people go for deliverance, it’s like those ones have expired, they are no longer in vogue, people should get ready for deliverance and protection prayers against 5G and demons of ONE WORLD ORDER. Na today??? Abeg make I come dey go.

2 thoughts on “YOUR PASTORS DON’T WANT 5G, BUT THEY ARE USING 4G TO RECEIVE TITHES AND OFFERINGS -Rev. Fr. Oluoma”