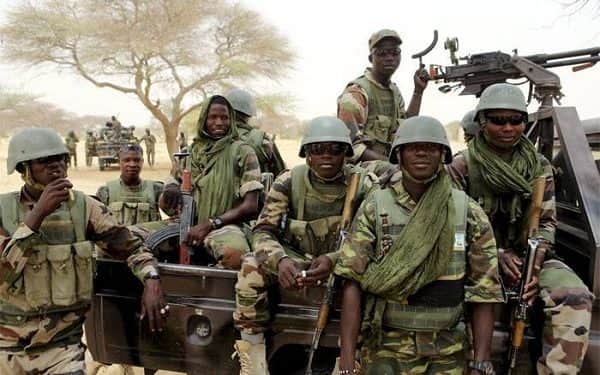 The Nigeria Army, under ’’Operation Sahel Sanity’’ on Monday arrested 13 notorious bandits terrorising Katsina and other North West states in their ongoing onslaughts against bandits terrorising the region
Acting Director, Defense Media Operations, Nigerian Army, Brigadier- General Bernard Onyeuko made the disclosure in a statement in Katsina.
He added two of the bandits were massacred and 10 kidnapped victims rescued while one AK47 rifles, one Dane gun among other dangerous weapons were recovered from the bandits.
He said: ‘’The Nigerian Army’s quest to eliminate banditry and other nefarious activities afflicting the North-West region was yielding tremendous successes.
“On 28 August 2020, troops conducted a raid operation at some identified bandits hideouts at Gamji Village and during the operation, 6 suspects were apprehended while troops recovered 1 Dane Gun, 1 Motorcycle and 2 cutlasses from the suspects.
“Same day, troops deployed at Zakka acting on credible intelligence arrested 3 suspected armed bandits namely Sagar Garba, Hafisu Mato and Suleiman Sada. Suspects were identified by locals to be members of a syndicate terrorizing the general area”.
The Defense spokesman further disclosed after preliminary investigations the suspects confessed to their involvements in cattle rustling at Kwaya, Sabon Birni and Baure villages of Sokoto and Zamfara states.
He assured the arrested suspects were undergoing investigations while efforts were ongoing to apprehend other criminals launching deadly attacks on communities within the affected areas.

TINUBU IS THE BEST POLITICIAN THE SOUTH CAN OFFER FOR 2023...

2023 Presidency: Who will Run from Southeast?