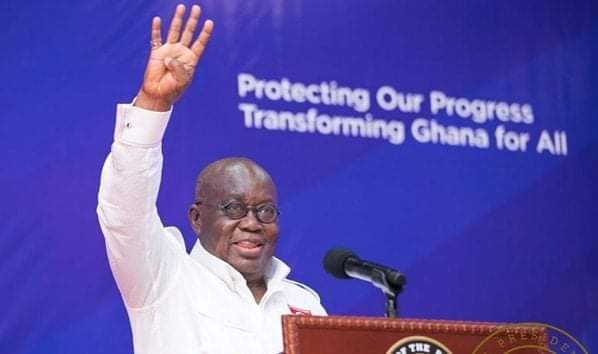 President Nana Akufo-Addo has won the 2020 presidential election in Ghana, defeating his closest challenger and former president John Mahama by polling 6,730,413 votes (51.59 per cent).
Mr Mahama, who contested on the platform of the National Democratic Congress, got 6,240,889 votes (47.36%).
Mr Akufo-Addo, who contested on the platform of the New Patriotic Party, won in eight of the 16 regions while Mr Mahama won in the other eight.
Akufo-Addo re-elected for second term in Ghana
by PM News
Ghanaian President Nana Dankwa Akufo-Addo has been re-elected for a second four-year term, the electoral Commission announced on Wednesday.
He polled 6,730,413 votes, representing 51.595 percent of the total valid votes cast.
His rival, John Dramani Mahama of the National Democratic Congress (NDC) got 6,214,889 votes representing 47.36 per cent.
Akufo-Addo ran on the platform of the New Patriotic Party.
Turn out was 13, 434,574 representing 79 per cent of the 17 million registered voters.
After putting Ghanaians on tenterhooks since 5pm on Tuesday, the Chairperson of the EC, Mrs Jean Mensa finally pronounced the winner.
She described the elections as “incident free” and “peaceful, although police said five persons died.”
While Akufo-Addo beat Mahama by about 500,000 votes, his party was locked in a nail-biting finish to secure a majority in parliament.
With two seats left to be declared, the NPP secured 137 seats out of 275 seats, while NDC got 135 seats. An independent got one seat.
Two seats for Sene West and Upper Denkyira West remain to be called.