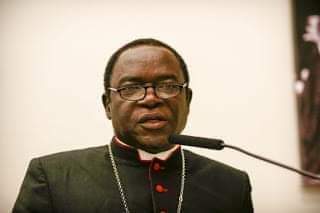 The Catholic Bishop of Sokoto Diocese, Most Rev. Matthew Kukah, has said he is ready to apologize if his accusers are able to point out where he denigrated Islam, in his Christmas message last December. He expressed surprise that his criticism of the President is now seen as an attack on Islam.

Kukah’s comment came after the Secretary-General of the Jama’atu Nasril Islam (JNI), Dr. Khalid Aliyu, accused him of indirectly attacking Islam while hiding under criticism of President Muhammadu Buhari.

In the controversial message, Kukah had said, “Every honest Nigerian knows that there is no way any non-Northern Muslim President could have done a fraction of what President Buhari has done by his nepotism and gotten away with it.

In a reaction, Aliyu said, “Though the message is disguised as a political hogwash to deceive the innocent, there is no doubt that it was a poisoned arrow fired at the heart of Islam and Muslims in Nigeria, hence the need for this intervention.”

But Kukah in his response, said, “Dr Aliyu has accused me of being an enemy of his Religion, Islam. He accused me of what he calls, firing an arrow at the heart of Islam and Muslims in Nigeria. He says I have been accorded respect and accommodated in Sokoto and I have turned around to bite a finger that has fed me.

“He poses a question: How can Muslims continue to be hospitable to one who proves to be an ingrate many times over? How can Muslims be comfortable in associating with a bitterly vindictive person disguised in the garb of a religious cleric? I can only take this statement from the Secretary-General of JNI as a clear case of incitement to violence against me.

“The relevant paragraphs in my Sermon focused on the two painful themes of nepotism and the haemorrhaging of lives in our country, a fact that as I said, most religious leaders and statesmen and women have alluded to.

“How a critique of government policies suddenly becomes hatred of Islam and the north, beggars belief. I am therefore calling on Dr. Aliyu to clarify and validate his accusations against me and advance the reasons why he should incite violence against me,” Kukah’s counter-statement read in part.

I’m Not Against Fulanis, But Killer-Herdsmen – Sunday Igboho

JUST IN ! Tinubu Returns to Nigeria after One-month Absence