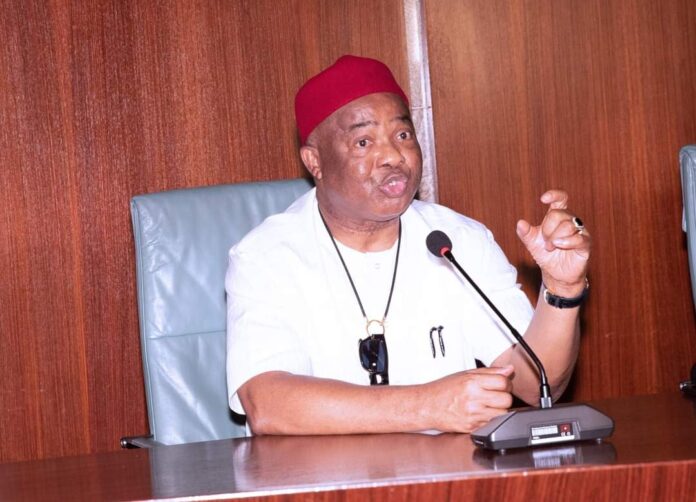 Imo State Governor, Hope Uzodinma, has said aggrieved politicians sponsored Monday attacks in the state.
Uzodinma spoke on Wednesday while featuring on Channels Television’s ‘Politics Today’ programme monitored by The PUNCH.
The PUNCH had reported that gunmen on Monday attacked the Owerri Correctional Prison and freed over 1800 inmates. The attackers also razed the Imo State Police Command headquarters situated in Owerri and burnt all the vehicles parked at the command headquarters.
The hoodlums further freed the suspects in the cells at the State Criminal Investigation Department of the command and made an attempt to loot the police armoury in the state.
The PUNCH gathered that the gunmen operated from 1am till 3am on Monday and sang solidarity songs at the Government House Roundabout for about 30 minutes before attacking the facilities.
The police have since accused members of the Eastern Security Network, the security arm of the proscribed Indigenous People of Biafra, of been the masterminds of the attacks but the secessionist agitators led by Nnamdi Kanu have since denied the allegation.
But speaking on the television programme, Uzodinma discredited the claim that IPOB members perpetrated the heinous acts.
He said, “Their (attackers’) tactics is that they try to identify grievances of people in a particular area. If it is in Imo State and probably there are some IPOB people who are not happy, they hire hoodlums from outside Imo State, they bring them in pretending to be IPOB and they commit these crimes and they go away.
“So, it is not about IPOB. Yes, we agree, we have aggrieved IPOB members but I can tell you those who are doing this destruction, most of them were brought in from outside Imo State.”
Continuing, the governor said, “What is important for Nigerians to know is the plot by a group of aggrieved politicians to destabilise the government of APC (All Progressives Congress).
“I have done some thorough investigation and I have some credible lead as to those who are sponsoring these activities of these hoodlums.
“I don’t want to pre-empt the investigations of other security agencies but I can tell you we are working hard to ensure the sponsors of this dastardly acts must be brought to book.”

FAMILY KICKS AS 6 NIGERIANS ARE JAILED IN UAE FOR ‘FUNDING...