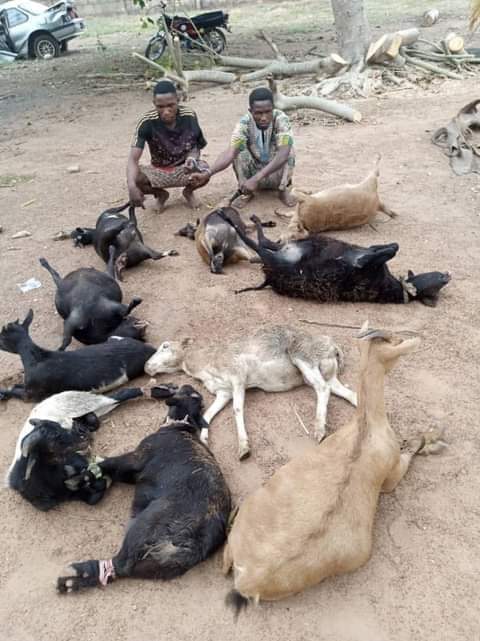 The command’s Public Relations Officer, Sunday Abutu, who disclosed this in a statement on Friday, in Ado-Ekiti, said the suspects were intercepted by a group of hunters in Igbemo-Ekiti, in a Saloon Primera car while conveying the goats to Ado-Ekiti, but they confessed during interrogation to have stolen all the goats in Ise-Ekiti.

He explained that due to suffocation, five out of the ten goats kept inside the boot of the car died in the process.

Abutu said the arrest was made by a team of Detectives and Patrol who swung into action following a call received at about 7:00am on Thursday by the Divisional Police Headquarters in Iworoko-Ekiti from a group of hunters in Igbemo-Ekiti.

The statement read,
“On 08/04/2021 at about 0700hrs, the Divisional Police Headquarters, Iworoko, received a call from a group of hunters at Igbemo-Ekiti that they intercepted a Saloon Primera Car with two occupants carrying ten(10) goats suspected to have been stolen.

“Upon the receipt of the information, the Divisional Police Officer(DPO) Iworoko led a team of Detectives and Patrol to the scene where the two suspects were arrested and brought to the Station.

“The suspects, during interrogation, confessed to have stolen all the goats from Ise-Ekiti and were bringing them to Ado-Ekiti where they reside before selling them.

“Five(5) out of the ten goats kept inside the boot of the car died in the process.

“While commending the efforts of the hunters, the suspects will be charged to Court as soon as investigation is concluded by Ise-Ekiti Divisional Police Headquarters

He urged the residents to always and quickly draw the attention of the nearest police station to any suspicious incident or happening observed in their locality or call 08062335577.

Why We Mix Hypo, Detergents And Potash With Cassava To Make Fufu – Fufu Producer

YOBE COMMUNITY WHERE SNAKES ARE FRIENDS WITH HUMAN BEINGS *Why we...

Germany Set to Return Benin Bronzes 125 years after Looting by...

INDIGENOUS INVESTMENT AND A NEW GAS ECONOMY By Taofik Salako