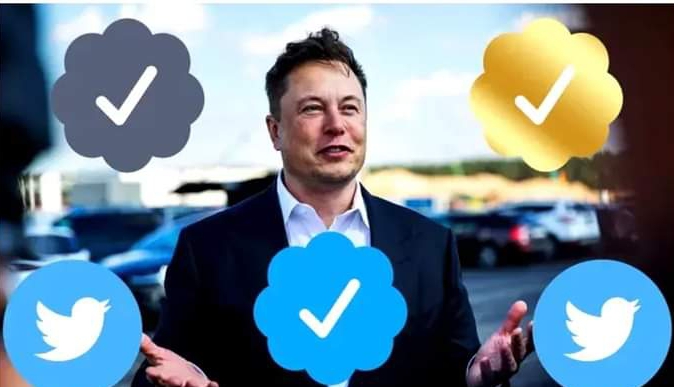 The Chief Executive Officer (CEO) of Twitter, Elon Musk announced on Friday that there would be a launch of different coloured verification badges to distinguish between accounts.

Musk also said that all verified individual accounts would have the same blue check, but some would be able to show secondary colours, AFP reports.

“Gold check for companies, grey check for government, blue for individuals (celebrity or not) and all verified accounts will be manually authenticated before check activates.”

He said further that others would display “secondary tiny logo showing they belong to an organisation if verified as such by that organisation.”

The American billionaire proposed that users would be able to pay to be “verified” and get a blue badge on their profiles, but this has caused confusion since he acquired the social media giant last month.

According to the report, he also proposed a subscription fee of $8 a month to allow users to obtain the blue check – which was previously free but reserved for organisations and public figures in an attempt to avoid impersonation and misinformation.

The first rollout of Musk’s subscription plan in early November quickly went south, with many accounts paying for the blue check and then impersonating world leaders, celebrities or companies.

Responding to the backlash, Musk initially postponed the launch date to November 29, before delaying it once more. It now appears the feature will launch on December 2.

Musk has said he wants to charge users for subscriptions to the social media platform to diversify its income stream. Twitter currently depends on advertising for 90 per cent of its revenue.

Several major brands have withdrawn from advertising on the platform since Musk bought it, fearing that his promised relaxation of content moderation could open their companies up to being associated with objectionable content.

According to the NGO Media Matters, half of Twitter’s top 100 advertisers have announced that they are suspending or “have apparently suspended” their spending on the social network.

WARNING ! Do Not Partake In TikTok Challenge – NCC | Citizen NewsNG