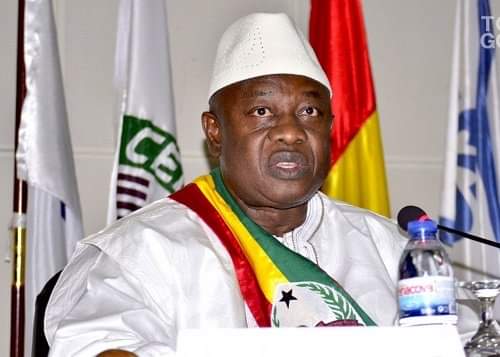 ONE of the two men declared president of Guinea-Bissau, Cipriano Cassamá, has resigned from the post after just one day in office, saying his life was in danger.
Cassamá was chosen by lawmakers as president following disputed elections in December.
This was despite the fact that former Army General Umaro Cissoko Embaló had already been sworn in as president at a hotel in the capital, Bissau.
Guinea-Bissau has had nine coups or attempted coups since 1980.
A former Portuguese colony in West Africa, it has also become a key trafficking point for drugs from South America on their way to Europe.
This has led to it being dubbed a “narco-state”.
Ministries are closed and surrounded by armed guards, as the country lurches through a protracted crisis that some parliamentarians are calling a coup.
A truck of soldiers from a regional force, deployed to Guinea-Bissau about eight years ago, are guarding the home of Aristides Gomes, one of two men laying claim to the post of prime minister.
The soldiers are perched on their white truck, with a mounted machine-gun pointed outward and at the ready.
Mr. Gomes’ home is just a few hundred metres from the presidential palace.
On the same street, the ministries of Finance, Justice and Fisheries are all closed and guarded by armed officers.
But residents appear to be continuing with their daily lives – cashew vendors are still on the streets, and residents are still withdrawing money from cash machines along Avenue Amilcar Cabral, named after the revolutionary who led Guinea-Bissau’s campaign for independence.
The poll was intended to draw a line under the past, but it has triggered a new political crisis in a nation where the military wields huge political influence.
The national electoral commission declared that Embaló had beaten his main rival, Domingos Simoes Pereira, by 54% to 46% in the December 29 run-off election.
Outgoing President José Mário Vaz handed power to Embaló at a ceremony at a luxury hotel on Thursday.
But Pereira’s PAIGC party, which led Guinea-Bissau to independence and was the only legal party until 1990, rejected Embaló’s inauguration, saying the election was marred by fraud.
It then used its parliamentary majority to swear in Cassamá, the parliamentary speaker, as interim president, until the Supreme Court ruled on its bid to annul Embaló’s victory.
Cassamá said he had no choice but to give up the post because he had received death threats.

THE RISE AND RISE OF IDRIS BEBY By Tatalo Alamu

Buhari Should Wake Up, Fight Banditry in his Backyard –Obasanjo