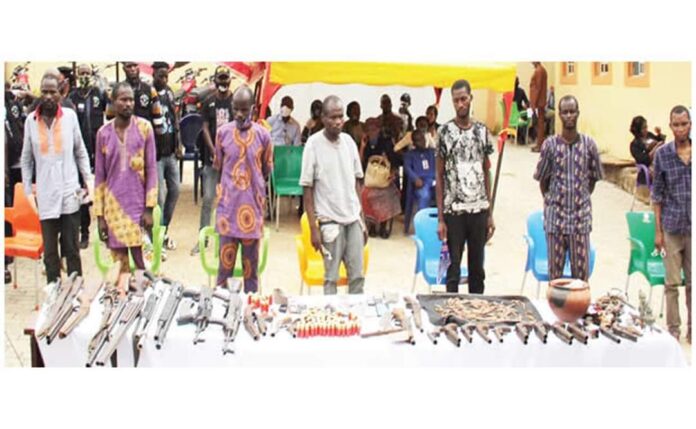 The leader of a gang that robbed three banks in Ekiti and Ondo states between 2019 and early this year has said that a member of the gang shot him for confronting him over the killing of six policemen and civilians during a robbery.
Tubosun Ojo confessed that he led others to rob the banks, but denied killing the policemen during a robbery in Ile-Oluji, Ondo State.
The gang had attacked the United Bank for Africa branch in Oye Ekiti, Ekiti State, a microfinance bank in Idanre, and the Wema Bank in Ile-Oluji, both in Ondo State.
The Force spokesman, DCP Frank Mba, paraded 42-year-old Tubosun alongside Ismaila Ojo, 25; Victor Owoyemi, 36; John Adeniyi, 42; Shola Oladimeji, 50; Olubajo Fatoye, 41; and Dele Ariyo, 44, as well as 23 others in Abuja on Thursday.
Tubosun said his gang attacked many banks in the South-West, adding that he selected the targets.
He stated, “We are armed robbers operating in the South-West; we prefer banks. As the leader of the gang, I chose which bank to rob and the particular time. We have robbed many banks across the region.
“During one of our operations in Ile-Oluji, after the initial surveillance of the area, two of our guys were outside, two held the people inside the bank down, while I personally packed the money.
“But before I could come out of the bank, our guys had killed six policemen and other civilians. When I confronted them on the killings, one of them threatened to kill me and shot at my leg.”
He explained that he did not go to hospital for treatment, adding that he took antibiotics and massaged the gunshot wound with hot water until it healed.
Asked how much he got from the heists, Tubosun said the amounts varied, but added that his share from the Ile-Oluji robbery was N1.1m.
“God knows that we have sinned already. We have sinned against God and humanity. He knows why we were arrested. If not for Him, we would not have been arrested. We have asked God for forgiveness and we know He will forgive us. We are praying that you all should forgive us,” he added.
Mba said the suspects were arrested by the officers and men of the IGP Special Tactical Squad led by the Commander, DCP Yusuf Kolo, in their hideouts in Ondo, Ekiti and Ogun states.
Stressing that the gang was highly organised, he stated, “They each have assigned roles; Fatoye and Ariyo are Okada riders, who were stationed at vantage positions to watchout for security operatives around the place. Others would be right inside the bank operating.”
According to the police, items recovered from the gang include two pump action rifles, one AK-49 rifle, one AK-47 rifle, 19 locally-made rifles, 129 live cartridges, 145 rounds of live ammunition, assorted charms and one Toyota Corolla car.

Who Shall Tell The President Nigeria Is Dying? By Dele...