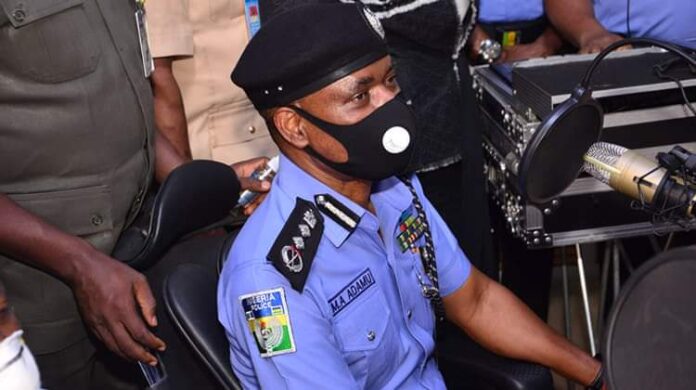 Inspector General of Police, Mohammed Adamu, during the inauguration of the Nigeria Police Radio 99.1FM in Abuja.

The Inspector General of Police, Mohammed Adamu, has inaugurated the Nigeria Police Radio 99.1FM in Abuja, which he said was aimed at bringing the police closer to the people and serve as a trusted point for resolution of complaints by citizens.

Speaking during the event at the Life Camp premises of the station on Wednesday, the police boss explained that the community radio would also help in combating crime.

According to him, the station, which has since commenced test transmission in line with the National Broadcasting Commission code and operational regulations, would serve as a veritable avenue for the police to engage, enlighten and inform the public on policing activities and other security-related matters.

The radio, he added, will also air phone-in programmes to involve the citizens in the security of their localities, especially on ways to spot and report crimes and other necessary steps to take in the event of a crime or security emergency.

The IGP explained that the facility would offer people-oriented programmes which would help strengthen police-citizens relations.

Adamu stated, “On assumption of office as the 20th indigenous Inspector-General of Police, we introduced some strategies to combat crimes and stabilize security across the country. As part of the implementation processes, we appreciated the need to bolster partnership and good working relationship between the police and the people in our various communities.

“One of these strategies is the construction and set-up of this community-based radio station – the Nigeria Police 99.1FM Radio which is targeted at bringing the police closer to the people. I assure Nigerians that the Nigeria Police Radio will pave way for continuous proactive policing in the country and will further strengthen the bond between the police and the people.’’

The Senior Special Assistant Media and Publicity to the President, Garba Shehu, lauded the project, saying the radio would help in bringing the force closer to the people.

HOW I VOWED NEVER TO DECEIVE THOSE WHO ELECTED ME -SENATE...

Office Of Accountant General, Others Are Problem Of Nigeria Not Politicians...

No One Is Exempted From Paying Waste Bills – LAWMA MD...

Olokun Festival Will Continue To Serve Its Purpose, Promote Our Culture...