Palpable fear on Saturday gripped residents of Ado-Ekiti, the Ekiti State capital as explosion suspected to be bomb rocked buildings on the premises of the old governor’s office.
The old governor’s office located at Oke Ori-Omi area of the Ado Ekiti metropolis is where the Ministry of local government and chieftaincy affairs, is located.
The explosion, The Nation, gathered occurred around 7:05 am caused panic in the area and its environs as it shook buildings located several kilometres away from the scene of the incident.
The incident occurred at the Ordinance Explosive Disposal Department (EoD) of the Ekiti police command located within the premises of the government secretariat.
The bungalow apartment of the EoD office was turned into rubbles while the adjoining offices that housed the office of the Nigerian Union of journalists, Correspondents’ chapel, Ekiti chapter was badly affected.
All the offices around the area were affected, with their louvre blades and glasses shattered to pieces while the asbestos and polyvinyl Chloride (PVC) ceiling, doors and windscreen of vehicles parked around the offices were forcefully removed and scattered.
When our reporter visited the scene, the police Commissioner, Mr Asuquo Amba and officers of the anti bomb squad were still removing some of the explosive materials in the area.
While addressing newsmen at the site of the explosion, the Amba explained no life was lost, adding that he suspected that the explosion was caused by counter-terrorism accessories kept in office.
He said: “Let my men from anti bomb department check around. Officers of the anti bomb are combing the place as you can see.
“This is the office where they keep detonation accessories. The explosion must have been caused by equipment kept in their stock house.
“The area has been cordoned off. We are going to devise means of ensuring Improvement in the stocking of these equipment next time.
“We are happy that there is no loss of life, no casualty. Some of these devices are used to detect bomb and to detonate it. Some of them used to detonate on their own and that must have caused the explosion”, Amba stated.
Governor Kayode Fayemi and his deputy, Chief Bisi Egbeyemi who visited the site for on-spot-assessment said the anti-bomb department shouldn’t have been located in the area, stressing “it ought to be in a far distance.
In a statement signed by the Commissioner for Information, Muyiwa Olumilua, shortly after the incident, said: “an explosion was reported earlier this morning at the Explosives Ordnance Disposal (EOD) office in Ado Ekiti.
“An initial on -the- spot assessment confirms that there are no casualties and the area is secured with no further threats.
“Members of the public are advised to go about their normal duties”, the statement said.
Explosion rocks old Ekiti govt secretariat
by Abiodun Nejo, Ado Ekiti
There was a deafening explosion in the old secretariat of Ekiti State Government, Ado Ekiti in the early hours of Saturday throwing the entire state capital into confusion.
The explosions, which occurred about 7.05 am in the Explosion Ordinance Disposal Unit situated within the old secretariat, reduced the EOD building into rubble and shattered windows and ceilings of the government offices compound.
There were, however, no casualties in the incident.
The Commissioner of Police, Ekiti State, Asuquo Amba, said at the site of the blast that he suspected that the explosion was caused by counter-terrorism accessories kept in the office.
“Let my men from anti-bomb department check around. Officers of the anti-bomb are combing the place as you can see,” he said. 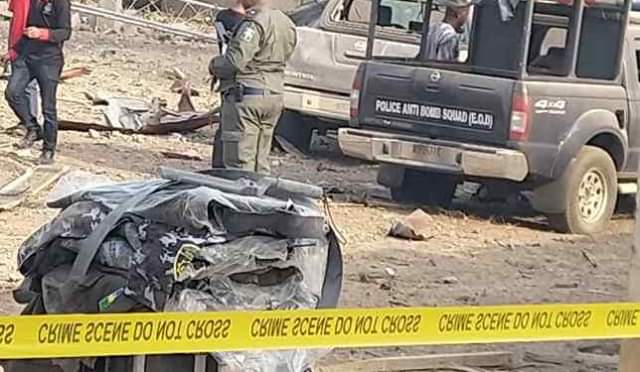 WE MUST RECONCILE TO REBUILD OUR LAGOS –Deputy Gov, Hamzat

SANWO-OLU ONE YEAR AFTER By Bayo Osiyemi

NO ONE ASKED US FOR COMPESATION OVER 2009 FLU -Chinese Embassy...