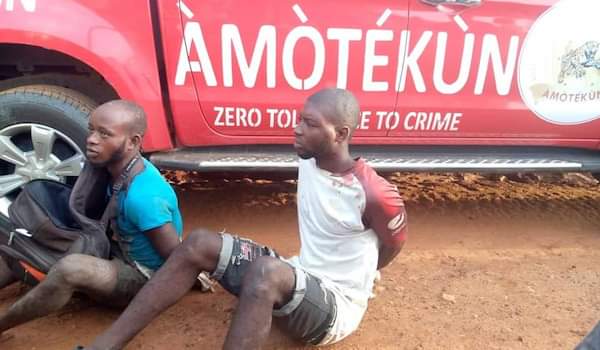 Men of Amotekun Corps in Osun State on Saturday arrested two men who allegedly broke into a residential building and stole five women underwear in Ajaba, a community in the Ila Local Government Area of the state.
The suspects, identified only as Friday and Toib, were reportedly caught after using an axe to break into a house in the community and steal the items.
The state Director-General of Amotekun Corps, Amitolu Shittu, told Sunday PUNCH that the suspects were nabbed following a tip-off by some residents.
Shittu said, “Residents of Ajaba had for long monitored the two men; Toib and Friday, and suspected that they were criminals. Our men caught them after they had broken into a house. They stole five women pants in the house.
“The suspects used an axe to break into the building, though they have refused to tell us what they intended to do with the stolen underwear.
“But it is curious that out of several items in the house, the only belongings the suspects stole were women underwear. We intend to follow up on this. Items recovered from the suspects include five women underwear and a small axe.”
Shittu commended the residents of the community for their cooperation with men of the Amotekun Corps and making it possible to arrest the suspects.
He added that the suspects had been handed over to the police for further action.