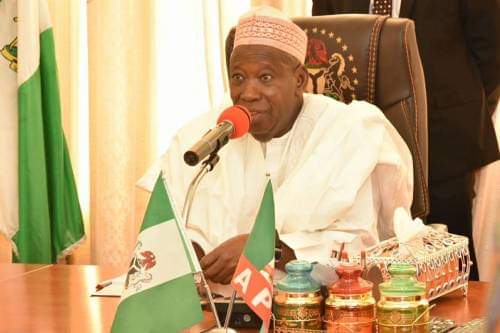 Kano Governor Umar Ganduje has asked the Federal Government to halt the movement of herdsmen from other countries to Nigeria.
This, he said, will curb crimes and criminalities occassioned by Fulani-herders conflict across the country,
He spoke during the commissioning of 25 housing units of RUGA settlement project at Dansoshiya forest, in Kiru local government on Saturday.
He said such measure became necessary to “successfully and effectively prevent the coming of herdsmen from other African countries, because they come to this country with guns and other weapons. Which flame the clash between herders and farmers.
“As they come with such weapons, they take crimes and criminalities to the country, adding that, “That movement is what brings to us all sort of clashes between herders and other communities, apart from the farmers.”
Dansoshiya RUGA, the Governor added ,would serve as nucleus of RUGA settlement project in the state.
He said criminal activities would be curtailed with the establishment of RUGA settlement, which include cattle rustling, kidnapping and armed robbery, among others.
“It is absolutely necessary to improve and modernise breeding system for Fulani cattle. As it clear that a gallon of milk is more expensive than one gallon of petrol, it is therefore necessary for us to utilize this great opportunity,” he said.
He promised to construct schools and hospitals in the settlement so that the people settling there could get access to good health delivery system and be educated, promising “the second RUGA project will be in Falgore forest. Where we have recently inaugurated military training ground.”

My Family is Tearing Apart – Governor Umahi’s Aide writes as...

LAGOS ASSEMBLY SUMMONS SANWO-OLU’S CHIEF OF STAFF, OTHERS OVER USAGE OF...