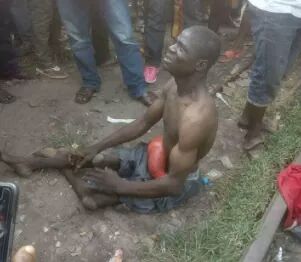 Benue State Police Command said eight (8) persons have been arrested in connection with public disturbances over alleged theft of male genital organs in Daudu, Guma Local Government Area in Benue State.
Benue State Governor, Samuel Ortom, hails from Guma Local Government Area and had intervened and pleaded with the youths in the area to maintain peace on Wednesday over the crisis of missing male organs.
Police spokesperson Kate Anene told newsmen that after investigations by the police, the claims that some people were experiencing dysfunctional male genital organs were false.
She stated that victims were taken to Benue State University Teaching Hospital where they were certified medically fit by a medical doctor but they insisted that their genital organs were removed.
The police spokesperson said one Saka Iorhemba and Prophet Jacob Uhembe of the same address were alleged to have conspired to mystically perpetrate this act and extort money from their victims as fee for healing.
According to the PPRO, properties belonging to the suspects were burnt down by a mob while the prophet escaped.
The command condemned in totality, violent approach of addressing issues and will deal with any violent person or groups in accordance with the laws.
Eight suspects have been arrested for actions liable to cause breach of peace and causing mischief.
The Nation reported that a church had been set ablaze and many other houses destroyed by youths allegedly protesting missing male organ in Daudu town in Benue State.

POLICE OFFICER RECALLED AFTER 21 YEARS OF WRONGFUL DISMISSAL, PROMOTED TO...

2023 Presidency: Tinubu to get Letter of Endorsement