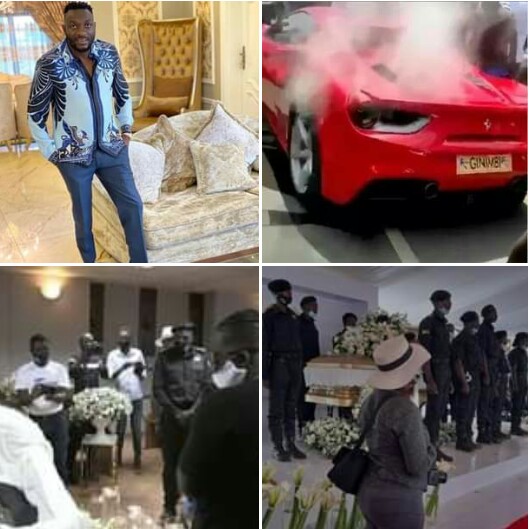 ‌
As Ginimbi’s death mystery deepens by each passing day, Ginimbi’s father Anderson Kadungure during his burial on Saturday at the Domboshava mansion decided to speak out on the mysterious events that transpired during his funeral.
This comes after, the late socialite/ businessman nGenius Kadungure was reportedly involved in yet another accident on Friday afternoon as his body was being carried to his mansion from the funeral parlor.

Delivering a graveside speech, Ginimbi’s father spoke out about the mysterious events that had happened on their way from the funeral parlor in the capital to their rural home on Friday.
” The hearse that was carrying his (Genius) remains was involved in an accident while we were coming from the parlor to here.”
“The hearse was hit from behind by a commuter omnibus. Luckily, Doves had provided three hearses, so we had to place the coffin into another hearse,” Anderson said
Ginimbi’s father revealed that up till now still finds it hard to understand all the mysterious events that happened during his funeral. He added that:
“As if that was not enough, it rained cats and dogs after the accident. It rained until we arrived home.”

According to the Daily News, one of his op of range cars, a Ferrari which was being driven by his best friend Rimo developed aa mechanical fault and spews smoke while in the CBD during the funeral parade, raising fears that it could have caught fire
Meanwhile, a motorist who was among mourners at Genius “Ginimbi” Kadungure’s mansion hit the late socialite’s precast wall and sped off from the scene.‌
In addition to that, the unidentified motorist is reported to have hit another mourner’s parked vehicle before smashing into the mansion wall.
Motorist Hits Ginimbi’s Mansion Wall: Damaged Wall, (Photo Credit: H.Metro

Twelve Unmistakable Signs His Love For You Has Burnt Out

WHO SUSPENDS TRIAL OF HYDROXYCHLOROQUINE FOR TREATING COVID-19