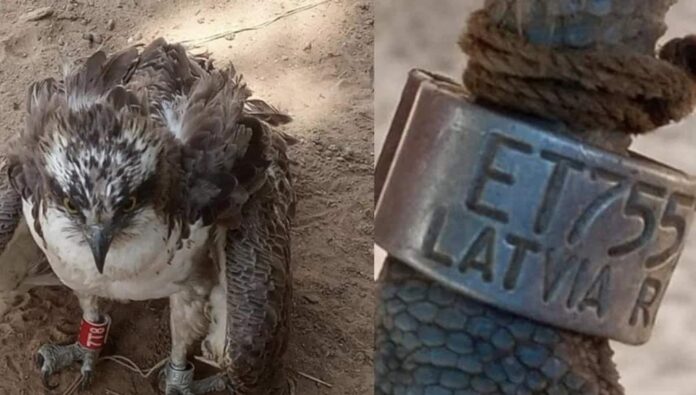 A bird suspected to have flown from Riga, capital of the Republic of Latvia, was caught in Cross River state.

According to Raphael Ogar Oko, the bird which has ring and band on its legs bearing some numbers, may have flown from a zoo in the European country.

The bird was caught by the two men pictured in Okpoma, the headquarters of Yala Local Government Area of the state on Sunday, January 17.

“The bird below seems to have flew from Latvia Riga and landed in one of our rivers in Okpoma area where it was caught at the riverside by the gentlemen below. The bird has a ring and a number on its leg. It may have moved from a zoo.” he said.

You are Stingy, I Swear – Fan Attacks DJ Cuppy for saying She’s most Genuine Person

STRANGE! Pensioner Burns Down his House to Prevent Estranged Wife from Returning

HOW BOKO HARAM OPERATED IN ADAMAWA COMMUNITY FOR SIX HOURS

How Moles in the Military Work for Boko Haram — Prof...

FEDERAL GOVT TO PROBE ABUSE OF NIGERIANS IN CHINA

Northern Group Disowns Gumi, says He’s on his Own