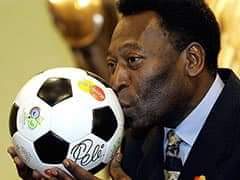 Brazilian football legend Pele, has died at the age of 82. He died after long battle with cancer.

He was one of the best players ever to play the game and a winner of three World Cups.

Pele had been battling cancer for a number of years.

The former striker passed away at Albert Einstein hospital in Sao Paulo, with his manager confirming the news on Thursday evening.

The late legend had a tumour removed from his colon in September 2021 and has been in and out of hospital for regular treatment since then.

He spent his last days surrounded by his family who remained by his bedside over the Christmas period.

Pele, full name Edson Arantes do Nascimento, made his club debut for Santos at the age of 15, scoring 643 goals in 659 appearances during a golden era for the club.

At international level, Pele was an iconic figure of the game in the 1950s and 1960s and remains the only player to have won three World Cups, scoring 77 goals in 91 appearances for the national team.

His record of 1279 goals in 1363 appearances in all games including friendlies is recognised as a Guinness World Record.
More To Follow…
FOR ADVERT, POLITICAL CAMPAIGN ONLINE BANNER & POSTER DISPLAY, EVENT COVERAGE, SPONSORED ARTICLE/STORY PUBLICATION, PR AND OTHER MEDIA SERVICES:
PLEASE, SEND AN EMAIL TO : citizennewsng@gmail.com