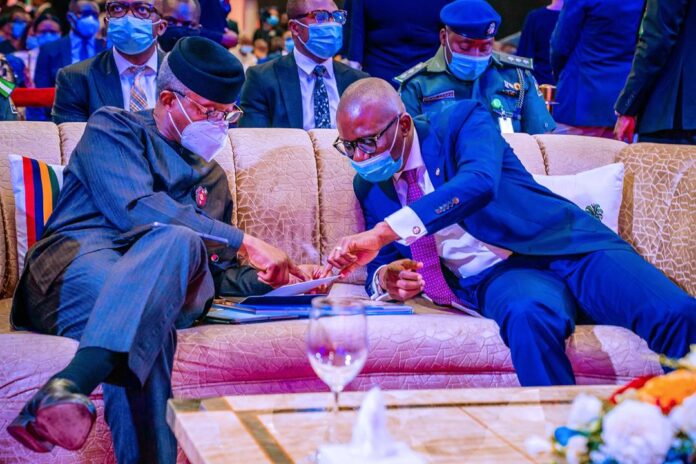 Vice President Yemi Osinbajo on Monday formally launched the Rebuilding of Lagos Trust Fund to rebuild Lagos in the aftermath of #EndSARS carnage in the State.
The eight-man Lagos Trust Fund committee is chaired by Yemi Cardoso, Chairman, Citibank Nigeria.
Properties worth hundred billions of naira were destroyed in Lagos by hoodlums during the #EndSARS violence.
Speaking at the event held at the Adeyemi Bero Auditorium. Alausa, Ikeja in Lagos, Southwest Nigeria, Osinbajo said never in the history of this nation has Lagos experienced mindless act of violence.
“The destruction of lives and property is a national tragedy and setback for the nation,” he said, saying that Lagos has been a non-oil revenue generating state.
He lamented that Lagos Port which generate most revenues for the nation was attacked, among several others, saying that in this darkest hour, there is silver lining.
“We have seen how EndSARS can be subverted and led to the exact opposite, we saw what can happen when anarchy occur. It is important we thoroughly investigate the deep construct that led to the carnage,” he added.
According to Osinbajo, “it is now time to rebuild Lagos, it is now time from private sector and others to rebuild. My President has said he would await report from Governor Babajide Sanwo-Olu to act, we are working with the National Assembly to jointly rebuild Lagos.”
Osinbajo said the assistance to be rendered by the Federal Government is for the rest of the country, but noted that Lagos has to take the bulk because of the massive devastation that occurred in the State.
The Vice President said the reconstruction of Lagos and others goes beyond bricks and mortal, but to rebuild trust between the government and the people.
According to Osinbajo, the nation is in need of healing, which was why President Buhari approved judicial panel of inquiry, adding that the Lagos panel has the mandate to investigate Lekki shooting.
Speaking, Lawan, who was represented by Senator Olamilekan Solomon said the rebuilding of Lagos is germane, saying that if there is anything that could be done in the short term to salvage the situation, it is now.
Lawan said in the long run, Lagos State deserved a special status, and that it was time for everybody to join hands together rebuild Lagos.
Details later…

Buhari Must Declare State of Emergency on Insecurity Now – Atiku