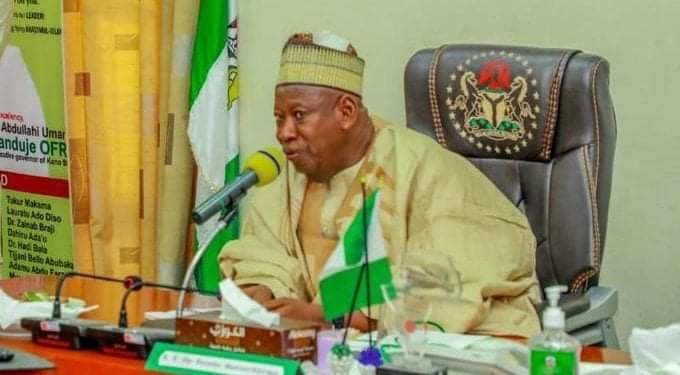 Governor Abdullahi Umar Ganduje of Kano State has stated that the All Progressives Congress, APC’s chances in 2023 are highly bright as Millions of Nigerians are registering to join in the revalidation exercise for its members.
Ganduje said, Nigerians have been keenly observing the performances of the party in the last five years and are convinced that APC is the only party that will salvage the nation’s misfortunes and make it great again.
The governor who on Sunday, flagged off the membership registration of the All Progressives Congress (APC) in the State, said the party has opened its windows for all Nigerians to join it.
The governor spoke after revalidating his membership of the APC at his Ganduje Cikin-Gari ward in Dawakin Tofa Local Government Area of the state.
The exercise was done in the presence of a seven-man committee assigned by the national leadership of the party to conduct the exercise.
He also called on members to turn out en masse for the registration exercise, adding that there is the need to expand the base of the party in the state and Nigeria.
“The last time the exercise took place was in 2014 and since then, we have a few people that left the party, and we have so many more that have joined the party.
“The exercise is important as the party is growing due to performance across the country,” he said.
Ganduje also added that there was the need to register non-APC members who voted for the party and are now convinced to join the fold.
He also appreciated leaders and members of the APC in the state for their steadfastness towards the progress of the party.
“I appeal to all stakeholders and party officials to conduct the exercise with all sincerity and in accordance with the guidelines issued by the national headquarters of the party,” Ganduje said.
The party committee chairman in the State, Kabiru Matazu, said that exercise would be done at the unit level of the wards.
He said there were teeming youths who had turned 18 years and are willing to join the party. He also called on women and youths in the state to come out en masse to register.
Other party leaders at the gathering also admonished party members to see the exercise as a call to duty in order to bring an all-round development to the state.

List of Executive Orders Biden Signed on Day One as US...