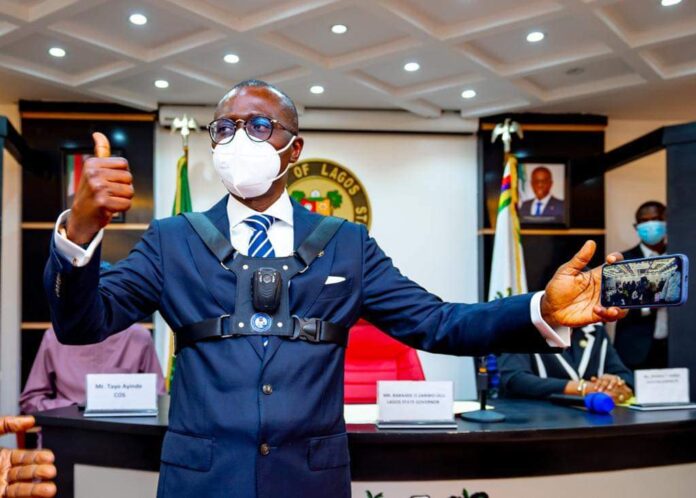 The Chief Press Secretary to the Governor of Lagos State, Gboyega Akosile, has described as false a video claiming to show people booing the convoy of his principal, Governor Babajide Sanwo-Olu.

The video which was shared by a Twitter user, @absuxxess, showed several cars leaving the premises of the Teslim Balogun Stadium, Surulere where the Super Eagles of Nigeria clashed with Lesotho in an African Cup of Nations qualifier game on Tuesday.

As the cars were leaving the premises, some youths at the gate booed the occupants with a chant of “Ole” which is the Yoruba word for thief and also threw empty plastic bottles at the cars.

According to the Twitter user who shared the video: “Immediately Governor Sanwo-Olu departed Teslim Balogun stadium after the match. Hear the response from supporters…”

Reacting to the video, Sanwo-Olu’s aide described it as false, adding that it is not the Governor’s convoy.

“This is wrong, totally false. This is not Governor @jidesanwoolu’s convoy. Let’s stay away from spreading falsehoods. I’d implore you to correct your wrongful publication,” he tweeted.

Another video was shared by a former presidential aide, Reno Omokri, with the caption, “Lagosians Disgrace @JideSanwoolu at Teslim Balogun Stadium.”

In response, Akosile shared photos to prove that the video, shared by Omokri of the booing that happened during the day, couldn’t have had anything to do with Sanwo-Olu because he was in the stadium till it was dark.

“Governor @jidesanwoolu was in the stadium till very dark yesterday. No incident as being spread by @renoomokri and his co-travellers happened during Mr. Governor’s departure from the Teslim Balogun stadium. Let’s stamp out #fakenews from our system,” he tweeted

All Set for Zonal Finals of National Principal’s Cup

Nigerian sentenced to Death in Vietnam for Drug Trafficking