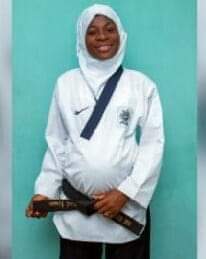 The 26-year-old expectant mother, who could be seen in a footage shared on Twitter demonstrating different combat techniques, also picked up other medals in a non-combat simulated category of Taekwondo known as Poomsae.

Speaking to CNN on Wednesday she said she feels elated by her accomplishment.
“It’s such a privilege for me. I just decided to give it a try after training a couple of times… It feels really good,” she said.

“Before I got pregnant, I have always enjoyed training, so it didn’t seem different with pregnancy,” Idrees added.

She went on to explain the category of Taekwondo she took part in.

“A lot of people don’t understand what Taekwondo is actually about. I feel this is an avenue to educate people about this. Taekwondo has two branches: the combat sport and Poomsae — which is a form of exercise…just displaying the hand and leg techniques in Taekwondo.

I participated in Poomsae event.

“I felt there wasn’t much risk attached to it, so I decided to give it a try. My doctor, as well as the organizing body of the games certified me fit to participate in the non-contact sport.”

How ‘My God’ Killed UNILAG Lecturer Who Demanded Sex From My...